Interpretation Letter 2-646(I) - Pictograph Use on Guide Signs

We have reviewed your request for clarification and guidance on the use of pictographs on Freeway and Expressway guide signs. A pictograph must generally provide additional navigational information that cannot be adequately conveyed by a word message alone. With regard to your specific inquiry, the use of the Lakefront district pictograph is not appropriate for use in Freeway guide sign applications, as it does not meet this and other criteria further explained herein. We offer the following policy information as a clarification of our memorandum dated July 27, 2005, with regard to the definition and use of a pictograph.

The term "pictograph" is defined as a pictorial representation used to identify a governmental jurisdiction, an area of jurisdiction, a governmental agency, a governmental approved university or college, or a branch of the military service. The original intent of allowing the use of a pictograph was for Street Name signs to allow municipal jurisdictions the option of including their governmental seal to express their unique identities. In this application, while the pictographs themselves provide little aid in navigation to a destination, they do provide a consistent appearance of the Street Name signs in a particular area of jurisdiction and would give a visual cue to motorists once they have left that jurisdiction or entered another whose signs display a pictograph of a different design.

The desire to use pictographs eventually expanded to guide signs in Freeway, Expressway, and Conventional Road applications, where the initial interest was to display the same jurisdictional seal on State, municipal, or other political boundary signs. Such signs are classified as general information signs and differ from other types of guide signs in that their function is to provide orientation to the road user rather than guide the road user to a specific destination. The information on such signs is limited to a place name. No other directional information, such as roadway names, route markers, cardinal directions, or action messages is displayed on these signs.

Freeways, Expressways, and higher speed Conventional roadways present complex driving environments that can place many attentional demands on the road user. Therefore, the legends on the major guide signs are limited only to that information that will serve to aid in navigation to the destinations displayed. The information that is useful - and that which can be comprehended in a short viewing distance - is limited to road names, route markers, cardinal directions, place names, and action messages. Pictographs add little, if any, useful or recognizable information that will aid in navigation to a specific destination that could not otherwise adequately and more appropriately be conveyed by a word legend.

The specific inquiry involves the Lakefront district pictograph on a series of Freeway guide signs that reiterates the associated word legend on each sign. These signs already display a potentially immoderate amount of information that the road user is expected to process. This series of signs is in an environment of a complex interchange that serves both system and service ramps in which the motorist is confronted with numerous decision points and destinations. In no way does the use of an undefined pictograph contribute to simplification of the decisionmaking process that the road user must contemplate that is not better served by the word message. Rather, the pictograph further complicates the sensory process by adding another unit of information to signs on which the pictographs are sometimes associated with, and at other times disassociated from the word message to which they apply.

The examples that are cited in your request illustrate three different applications of pictographs that are in use on Freeway guide signs in Wisconsin. The first example displays a pictograph used in conjunction with the word message "Historic Downtown La Crosse" on a Supplemental Guide sign. The use of a pictograph to designate a neighborhood in a Freeway application is not appropriate. The intent seems to be to define a pictorial representation of the neighborhood that is also presented in words. This type of use for a pictograph is more appropriately suited to Community Wayfinding signing, in which a pictograph is typically used as an enhancement marker at the top of a directional sign. The pictograph in Community Wayfinding signing might also be used to direct road users to specific neighborhoods or attractions from the local street system. Elements of Community Wayfinding signing systems are inappropriate for use on Freeway and Expressway guide signs because of their more complex and detailed designs that are not conducive to recognition and legibility needs in higher-speed environments. The purpose of Freeway and Expressway guide signing is to direct motorists to an exit to access the local roadway system. Once the motorist has accessed the local system, then elements of Community Wayfinding may be applied for progressive direction to specific destinations that might be complemented with unique designs that are part of an overall system of signs applied throughout the local street system.

The second example displays two destinations on a Supplemental Guide sign. One destination is an event facility and the other is for a neighborhood. Each is displayed with an associated pictograph. The pictographs for each of the destinations are inappropriate for the same reasons stated for the first example.

The third example provided displays a pictograph for a byway. This application differs from other types of trailblazers for named routes, such as toll highways, in that the designation of Great River Road is one of a touring route as an overlay on segments of several roads, rather than one of a single named highway. Such routes are more conducive to the posting of a word message on a Supplemental Guide sign for Freeway and Expressway applications, as the tour route name is generally not the primary designation for the connecting road. The Supplemental Guide sign may also include the pictograph for the route, placed to the left of the accompanying word message. The signing on Conventional roadways can then display the pictograph as part of route marker assemblies where it can be applied consistently so that the motorist can become accustomed to its design for trailblazing purposes where turns might be required in order to remain on the touring route.

In general, when used on a guide sign to provide navigation to a specific destination, the pictograph must aid in that navigation and be regionally or nationally recognizable, to the extent that it provides additional information to a majority of road users that the destination word legend would otherwise not communicate when used alone. Other pictographs that are used for orientation, but do not provide navigational guidance to a specific destination, are acceptable for use on general information signs for the purpose of providing a uniform appearance in a system of signs used throughout a specific geographical area that also serve orientation information rather than navigational guidance to a destination. The Lakefront pictograph, as well as the pictographs in the three examples provided, do not serve to aid in navigation that cannot be adequately and more appropriately be conveyed by the word messages displayed on the signs. Acceptable uses of pictographs are summarized in the attached table.

I hope that this information satisfactorily addresses your inquiry. We have assigned the following official ruling number and title to your request: "2-646(I) - Pictograph Use on Guide Signs." Please refer to this number and title in any future correspondence. If we can be of further assistance on this matter, please call Mr. Kevin Sylvester of my staff at 202-366-2161. 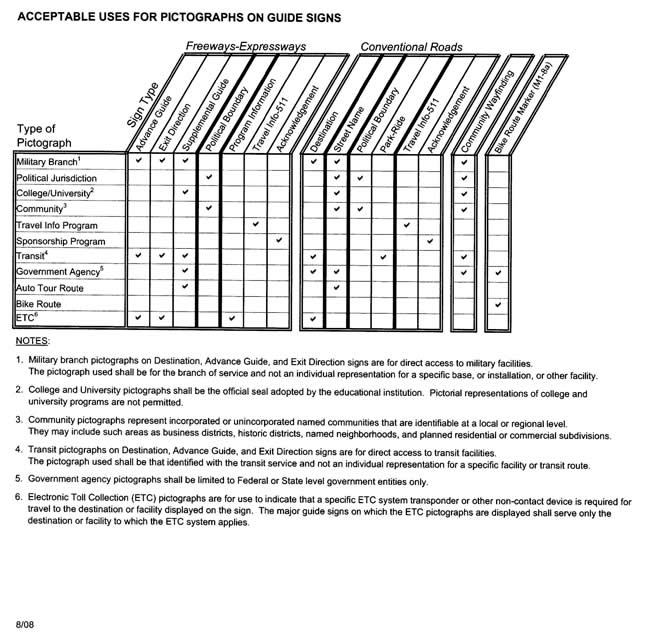