Thank you for your January 4 request for interpretation regarding the use of "sign kiosks" within the rights of way of conventional roadways to direct motorists to residential communities and subdivisions. The signs described and illustrated in your request do not conform to the provisions of the Manual on Uniform Traffic Control Devices (MUTCD) as explained further herein.

We appreciate the opportunity to provide this official interpretation and hope that it is helpful to you. We have assigned your request the following official ruling number and title: "2-660(I) - Sign Kiosks for Residential Subdivisions." Please refer to this number and title in future correspondence. If you have questions or wish additional information, please contact Mr. Kevin Sylvester at 202-366-2161.

Re: Manual on Uniform Traffic Control Devices (MUTCD)
Request for Official Interpretation - Use of Sign Kiosks

Pierce County, Washington is submitting this request for official interpretation regarding the use of sign kiosks along public urban conventional roads to provide directional signing to residential developments offering the first time sale and/or lease of signal family houses, multi-family condominiums, apartments or any other business in the process of being built-out or initiating commercial operations.

The proposed sign kiosk design is represented by the pictures shown in attached Figure 1. The panels would contain the name of the subdivision, new multi-family development or coming commercial establishment, and a directional arrow. The sign panels would be allowed to remain in a kiosk until 90 per cent of units within a subdivision, apartment or development are sold or leased for the first time or a new commercial establishment has been selling goods or services directly to customers for 180 days.

The kiosks would typically be located in advanced of an intersection or other similar decision-making point for approaching drivers, along County public (conventional) roads within the designated urban area of unincorporated Pierce County. They would be located at least 100 feet, and preferably 200 feet or more, from any other traffic sign or signal device, and mounted on breakaway supports. The kiosks would typically be placed in the public road rights-of-way, but it is possible that they could be placed on private property immediately adjacent to a road right-of-way and clearly visible to approaching drivers.

Condition that provoked the need for an interpretation:

A significant number of signs are being placed without permission in County road rights-of-way that direct home buyers and lessees to available new residences that are, by their very nature, located outside commercial districts and therefore are difficult to find without the assistance of directional signs.

The County had initiated a sign removal program, to remove unpermitted directional signs as well as non-directional signs from the road right-of-way. In response, the local real estate community stated that the availability of new home directional signs eases the home search process by allowing purchasers to combine neighborhood scouting and home scouting in the same outing. In a finding of the Pierce County Council, the County's removal of these signs elevated the need to prepare a legal mechanism for placing temporary directional signs in locations where they could assist buyers searching for new housing.

One proposal is to allow sign kiosks as described above to be placed within the road right-of-way if the kiosk structures providing panels for the stated use do not conflict with federal regulations governing traffic control devices.

The current 2003 MUTCD does not appear to specifically recognize the use of sign kiosks. The section which appears to most closely apply to the proposed sign kiosk design is Section 2G. Tourist-Oriented Signs, which provides for "business identification and directional information for business, service, and activity facilities." The facilities are defined as "derives a major portion of income or visitors during normal business season from road users not residing in the area of the facility." The section also indicates that these signs are intended for use "only on rural conventional roads."

However, in the current Notice of Proposed Amendment (NPA) that had a published date of July 31, 2008, there is a proposed new MUTCD Section 2D.52 Community Wayfinding Guide Signs. These signs "direct tourists and other road users to key civic, cultural, visitor, and recreational activities and other destinations within a city or urbanized area." Proposed Figure 2D-19 in the NPA shows examples of these signs.

Although there could be a perception that these wayfinding signs are intended for directing tourists to locations such as aquariums, museums, zoos, historic houses, forts, visitor centers, etc., the proposed language also appears to provide some flexibility, i.e., "other road users" (not just tourists) and "other destinations" (not just civic, cultural, visitor, and recreational activities).

If, on the other hand, the FHWA interprets that the proposed sign kiosk use is not under the purview of the MUTCD (i.e., it is not a traffic control device), then the County would also want to know if the proposed use would or would not be considered as advertising, since it is our understanding that the FHWA policy position is, "Use of highway right-of-way for advertising purposes is not allowed" (August 10, 2005 FHWA Memorandum on optional use of Acknowledgment Signs from J. Richard Capka, Acting Administrator). and "With regards to advertising signs within the highway right-of-way, the FHWA reaffirms its long held position that advertising is not permitted on highway right-of-way" (October 29, 2003 FHWA Memorandum on Acknowledgment Signs from Mary E. Peters, Administrator).

Based on the above, in its interpretation can the FHWA provide our agency guidance as to whether the proposed sign kiosks design and use is acceptable?

Thank you for your consideration of our request. We look forward to receiving your interpretation. If you would like any additional information or clarification of our request, please contact me at 253-798-2267 or at jelliso@co.pierce.wa.us 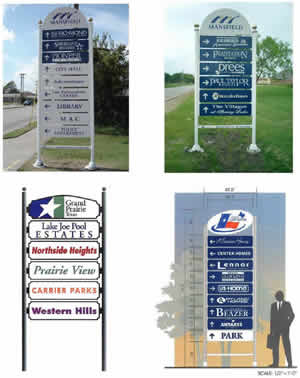