Thank you for your March 21 letter, requesting an interpretation of Section 3B.17 of the Manual on Uniform Traffic Control Devices (MUTCD) regarding the use of retroreflective colored pavement treatments. Specifically, you asked whether colored pavement treatments such as "StreetPrint DuraTherm" may be used, either with or without the normal transverse white lines of a crosswalk, to establish a legal crosswalk consistent with the MUTCD.

The Federal Highway Administration (FHWA) has issued two Official Interpretations of the MUTCD that address your question. Copies of interpretations numbered 3-152(I) and 3-169(I) are enclosed for your reference.

These two interpretations basically indicate that:

In summary, it is our interpretation that all of the examples of "StreetPrint DuraTherm" crosswalk pavement treatments shown in the photographs included with your letter are not in compliance with the MUTCD. If the City of Bellevue wishes to use these or similar types of markings, it is necessary to request experimentation approval from FHWA as per Section 1A.10 of the MUTCD.

Thank you for writing on this subject. If you have any questions, please call Mr. Scott W. Wainwright of our staff at 202-366 0857. Please note that we have assigned your request the following official interpretation number and title: "3-178(I)-Retroreflective Colored Pavement - Additional Clarification." Please refer to this number in any future correspondence.

Thank you for your August 17 email message, requesting an interpretation of Section 3E.01 of the Manual on Uniform Traffic Control Devices (MUTCD) regarding the use retroreflective colored pavement. Specifically, you asked whether colored pavement located between the transverse white lines of a crosswalk constitutes a traffic control device if it is retroreflective.

Section 3E.01 in Chapter 3E (Colored Pavements) contains text pertinent to this issue, including the following:

Additionally, the Federal Highway Administration (FHWA) issued Official Interpretation number 3-152 (I) "Colored Pavements Within Crosswalks" in December 2001 that stated, in part: "Because of their use predominantly for aesthetics and because they have no demonstrated viability in guiding or regulating traffic, for the purposes of Section 3E.01 colored pavement areas used in conjunction with marked crosswalks are not considered as being used as a traffic control device."

Section 3E.01 clearly states that the color of the pavement surface within the crosswalk should not degrade the contrast of the white crosswalk lines nor be potentially mistaken by road users as a traffic control application (i.e., to guide or regulate traffic.) Although some pavement surfaces might possibly be made retroreflective for decorative purposes, the stated purpose mentioned in the manufacturer's letter included with your message is to emphasize the crosswalk at night.

Such usage of retroreflective colored pavement would not be consistent with interpretation 3-152 (I) nor with the intent of text in MUTCD Section 3E.01. Also, there is no research we are aware of that documents any effectiveness and/or disbenefits of such a retroreflective pavement surface treatment.

Accordingly, it is our interpretation that colored pavement surfaces inside crosswalk lines are considered to be a traffic control device if they are retroreflective. However, there is no defined application in the MUTCD at present other than as stated in the Standard of Section 3E.01:

In conclusion, any proposed use of retroreflective colored pavement surfaces between crosswalk lines would be considered non-compliant with the MUTCD. The proposing jurisdiction would need to request FHWA experimentation approval in accordance with Section 1A.10, including a plan to evaluate the effects.

Thank you for writing on this subject. If you have any questions, please call Mr. Scott W. Wainwright of our staff at 202-366-0857. Please note that we have assigned your request the following official interpretation number and title: "3-169 (I)-Section 3B.19 Retroreflective Colored Pavement." Please refer to this number in any future correspondence.


This is in reply to a November 27 e-mail request from Mr. James Bush of your staff for an interpretation of the Manual on Uniform Traffic Control Devices (MUTCD) regarding colored crosswalks. The specific question was: "Are crosswalks with materials other than the base approach pavement and/or in colors such as red, yellow, green, terra cotta, etc., either between or without two parallel, transverse white lines permitted by the MUTCD?"

The most common use of a colored pavement in conjunction with crosswalks is that of bricks, or asphalt that is stamped with a pattern and colored to simulate a brick appearance (red, rust, or brownish colors). These treatments have been deployed mostly in urban "streetscape" areas, with the primary purpose of enhancing the aesthetics of the area, in conjunction with other aesthetic treatments like decorative streetlights, benches and other street furniture, etc. Although urban designers may sometimes ascribe enhanced visibility of the crosswalk (and, by implication, enhanced safety) as a secondary purpose of the colored pavement, there is no body of evidence that such safety benefits actually exist.

Section 3E.01 of the MUTCD states that when used for guidance or regulation of traffic, colored pavements are traffic control devices. Because of their use predominantly for aesthetics and because they have no demonstrated viability in guiding or regulating traffic, for the purposes of Section 3E.01 colored pavement areas used in conjunction with marked crosswalks are not considered as being used as a traffic control device.

Additionally, in Section 1A.13 of the MUTCD, in definition 17 (which is identical to the Uniform Vehicle Code), part (a) of that definition indicates that a crosswalk at an intersection does not have to be marked by crosswalk lines (this is commonly called an "unmarked crosswalk)." Part (b) of the definition indicates that a crosswalk can be distinctly indicated for pedestrian crossing by lines or other markings on the surface. Definition 18 in Section 1A.13 defines crosswalk lines as "white pavement markings on the surface." Further, Section 3B.17 requires the parallel transverse crosswalk markings to be white and the Option in that Section allows the area of the crosswalk to have 45-degree white diagonal white lines or parallel longitudinal lines (as shown in Figure 3B-15) "for added visibility."

Therefore, a colored pavement area without the white crosswalk lines is technically an unmarked crosswalk. When it is intended to have a marked crosswalk at a location, it must be so marked by white pavement markings---the parallel transverse white lines and/or the 45-degree diagonal "cross-hatch" markings or the parallel longitudinal lines.

For recordkeeping purposes, we have numbered and titled this interpretation "3-152(I)--Colored Pavements within Crosswalks." Please refer to this number in any future correspondence. In the next proposed amendments to the MUTCD, we will consider making revisions to Part 1 and Part 3 to address this issue. If you have a question, please contact Mr. Scott Wainwright at 202-366-0857.

To whom it may concern:

Pursuant to the Manual on Uniform Traffic Control Devices section 1A.10, the City of Bellevue is requesting an interpretation governing crosswalk markings. The City of Bellevue, located in Washington state, is considering the use of special street prints to compliment more typical markings used to establish crosswalks. Attached is the request for interpretation consistent with the outline described in section 1A.10 of the Manual.

Depending on the outcome of this interpretation, Bellevue may extensively use special pavement marking treatments over time, but in the immediate future would treat relatively few crossings (perhaps 1 or 2) to observe pedestrian and driver behavior relative to these treatments.

Should there be questions regarding this matter, can be reached at 425-452-6020 or email klatt@ci.bellevue.wa.us.

Attachment: Request for Interpretation with Appendix A depicting applicable photos of treatments


City of Bellevue
Request for Interpretation of MUTCD Section 3B.17 Crosswalk Markings

A. Statement of interpretation being sought:

Recent advances in coloring concrete, and ability to stamp patterns in concrete, as well as provide special treatments such as a "StreetPrint DuraTherm" product, which imprints patterns in the roadway surface, have raised the question as to allowable variations in marking crosswalks.

The specific interpretation being sought is whether special print patterns, either white in color or otherwise, can be used separately or in conjunction with the more typical pavement markings for crosswalks described in Section 3B.17. Examples of possible crosswalk marking treatments are included herein.

B. Description of condition provoking interpretation:

The City of Bellevue, in working with the community, has had many requests to supplement typical crosswalk markings with more noticeable and attractive markings that include special imprints in the roadway surface. New products allow for stamping existing asphalt pavement with various patterns that can be placed between the existing crosswalk lines establishing the crosswalk. In cases currently being considered, these special imprints, whether in concrete or asphalt would be supplemental to established crosswalk lines in the MUTCD. However, some jurisdictions apparently have used special prints which are intended to serve as crosswalk markings specifically called out in Section 3B.17. The City of Bellevue is requesting clarification as to whether street prints or other roadway surface treatments can be used, either in conjunction or on their own, to establish legal crosswalks consistent with the MUTCD.

Special imprinted treatments for crosswalks is new to the City of Bellevue. We have no specific data or studies unique to Bellevue. However, many cities across the nation, some of which are depicted in the attached photos, are using variations in markings for crosswalks. We have found no studies of the safety implications of using street prints an/or markings not specifically identified in the MUTCD.

Depending on the outcome of this request and the FHWA's interpretation of these treatments relative to crosswalk markings, the City of Bellevue could if necessary prepare a request for "Permission to Experiment." We will await FHWA's findings before proceeding with any permission to experiment as it may be found to be unnecessary and these treatments are compatible with the intent of Section 3B.17. 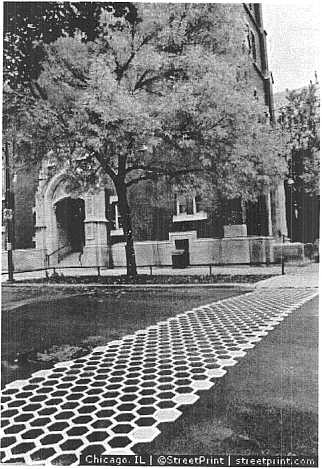 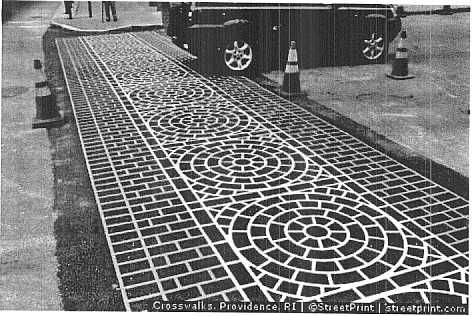 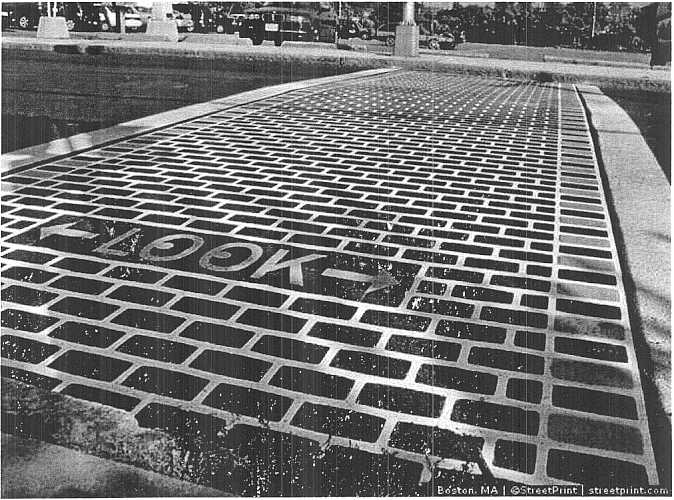 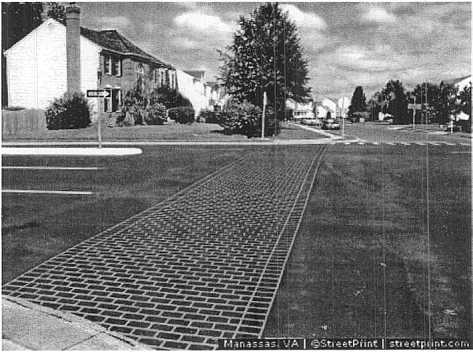 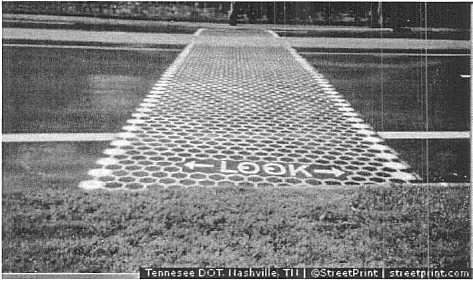 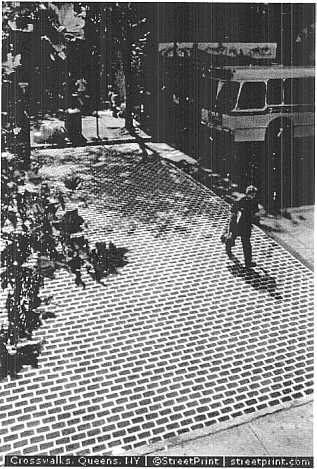