Thank you for your letter of July 15 requesting an official interpretation regarding whether your proposed Bicycle Destination sign (as shown on the attached page) is compliant with the Manual on Uniform Traffic Control Devices (MUTCD). Your proposed sign is a modification of the D1-3c sign that is illustrated in Figure 9B-4 of the 2009 MUTCD. The difference between your modified sign and the sign illustrated in the MUTCD is that instead of including three smaller bicycle symbols (one on each of the three destination/distance lines), your sign places one larger bicycle symbol on a fourth line at the top of the sign.

It is the FHWA's official interpretation that your proposed sign meets the intent of the requirements for the D1-3c sign as described in Section 9B.20 and illustrated in Figure 9B-4. It is also the FHWA's official interpretation that a similar modification could be made to the other signs illustrated in Figure 9B-4 that include a small bicycle symbol on the destination/distance line(s), such as the D1-1b, D1-1c, D1-2b, D1-2c, and D1-3b signs.

For recordkeeping purposes, we have assigned the following official ruling number and title: "9(09)-20 (I) – Modified Bicycle Destination Signs." Please refer to this number in any future correspondence regarding this topic.

Thank you for your interest in improving the clarity of the provisions contained in the MUTCD. 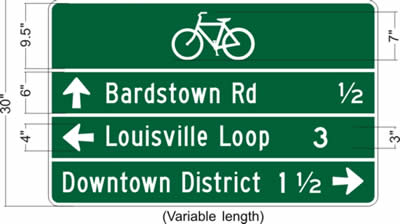