Motorists often fail to yield right-of-way to pedestrians in crosswalks. Thus, being a pedestrian can be extremely dangerous. During the three-year period of 2004 through the end of 2006 there were a total of 14,340 pedestrian fatalities and 193,000 pedestrian injuries resulting from pedestrian-automobile crashes nation-wide (National Highway Traffic Safety Administration [NHTSA], 2008). Decreasing the occurrence of these crashes and increasing the incidence of drivers yielding right-of-way to pedestrians would increase both safety and the overall experience of walking. The majority of pedestrian crashes occur at mid-block crossings. Any alternative traffic control device that is not a traffic signal has historically had minimal effect on motorist yielding behavior on multilane roads. Because of the high cost of traffic signals their installation is restricted to intersections with high motor vehicle and pedestrian usage. The traffic signal warrant also limits the application of such devices to high pedestrian volume areas.

One alternative to a traffic signal is the use the "High Intensity Activated Crosswalk" (HAWK) signal to assist pedestrians in crossing major streets. The HAWK beacon signal consists of two RED signal indications above a YELLOW signal indication forming a beacon signal that remains dark until activated by a pedestrian. Once activated the signal initiates a flashing yellow indication to warn approaching drivers, followed by a solid yellow identical to a normal signal to warn of impending requirement to stop. The solid yellow is followed by a brief solid red indication, which is followed by a wig wag flashing red signal requiring drivers to stop before proceeding. Although this signal has proven very effective in the city of Tucson, AZ, it is considerably more expensive to install than the relatively inexpensive rectangular stutter flash beacons evaluated in this report.

Turner et al. (2006) evaluated multiple treatments in an effort to increase motorist yielding to pedestrians at uncontrolled crosswalk locations. The Turner study included 11 separate treatments at sites across the country. The treatments included red signal devices (e.g., mid-block signals), active when present devices (e.g., pedestrian crossing flags, in-roadway warning lights and overhead flashing yellow beacon both with push button activation), and enhanced and/or high-visibility devices (e.g., in-street crossing signs, high-visibility signs and median refuge islands). Turner et al. found the most effective treatment for increasing yielding were the red signal devices. The treatment type that was second best, that did not include a red beacon, were the in-street crossing signs (87%) compliance. It should be noted however that these devices were evaluated on smaller two-lane roadways and would not perform as well on larger arterial roadways. The least effect devices were the high visibility signs (17%).

Along with increased yielding compliance it is important to increase yielding distance on multilane roadways, particularly those with high vehicle traffic volumes. When a motorist yields close to the crosswalk on a multilane road they may block the ability of the pedestrian to see approaching traffic (Figures 1) in the lane adjacent to the yielding vehicle as well as blocking the ability of any approaching vehicle to see the crossing pedestrian. Crashes that result from this type of visual screening are referred to as multiple threat crashes (Van Houten et al., 2001). The probability of this occurring greatly increases on multi-lane roadways with a high ADT because as traffic volume increases, the chance that a vehicle will be approaching in a lane adjacent to the one in which a driver is yielding also increases. This increase in probability further stresses the need for yielding at increased distances at multilane crosswalks. With motorists yielding at further distances, the screening effect is reduced thereby decreasing the chance that a motorist may strike a pedestrian. 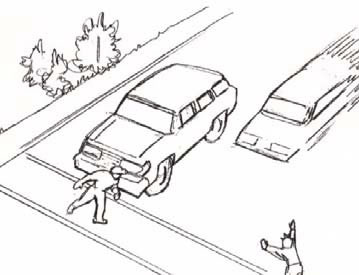 One method for increasing yielding distance is in-roadway is the use of advance yield markings and "Yield Here" signs placed in advance to the crosswalk (Figures 2, 5, & 6). Van Houten, R. McCusker, D. Huybers, S., Malenfant, J.E.L., & Rice-Smith, D. (2003) evaluated the separate and combined effects of in-roadway advance yield markings and sign prompts. The advance yield markings consisted of a row of large white triangles made of reflective material that were placed in advance of crosswalks. The sign prompts were "Yield Here to Pedestrian" signs with either a white or yellow-green background. These signs, when evaluated, were placed along side the in-roadway markings. The measures recorded were evasion conflicts and motorist yielding distances. The authors defined evasion conflicts as either the motorist swerving and/or braking abruptly to avoid striking a pedestrian or either the pedestrian running, lunging, and/or jumping to avoid being struck by a vehicle. During baseline, evasion conflicts occurred during 15.5% of the crossings. Either sign decreased evasion conflicts by about 10% when compared to baseline. When the white sign was evaluated along with the roadway markings, evasion conflicts decreased to about 2.5%. Either sign also increased yielding at 3 meters or greater by about 20% over baseline. The white sign and roadway markings combination increased yielding 33% over the baseline condition. In a second experiment, (Huybers, Van Houten & Malenfant, 2004) the authors reversed the order of treatment introduction. In this experiment the in-roadway markings were evaluated alone first followed by the addition of the white signs. The markings alone decreased the average number of conflicts from 17.3% during baseline to 5.4%. The addition of the white sign showed no change in evasion conflicts. The markings also increased those yielding at 6 meters or more from 14.2% during baseline to 51% during treatment. The addition of the white sign to the roadway markings showed little change. Because of the risk of multiple threat signs on multilane roads with a high ADT, advance yield markings should be used whenever crosswalks are marked on such roads. Although advance yield or stop markings can increase the safety of crosswalks on multilane roads, they only produce a small increase in driver yielding.

One inexpensive device to increase yielding rates on multilane roads is the use of pairs of rectangular yellow LED beacons that employ a stutter flash pattern similar to that used on emergency vehicles. This study evaluated the efficacy of the rectangular rapid-flash LED flash beacons (the housing is shown in Figure 2) mounted to pedestrian signs along with advance yield markings during daytime and nighttime operation with and without a median island or pedestrian refuge island (see Figure 3 for a photograph of the beacon system attached to the pedestrian sign). 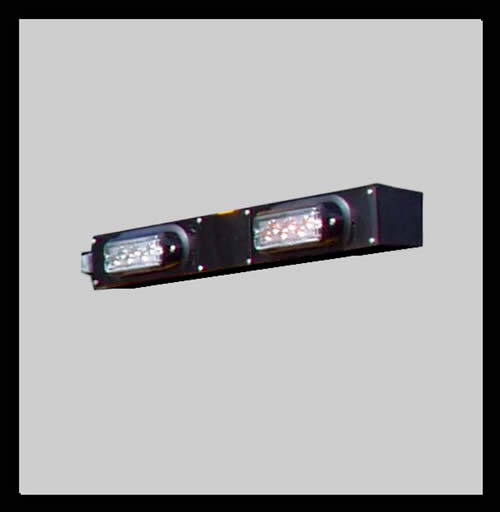 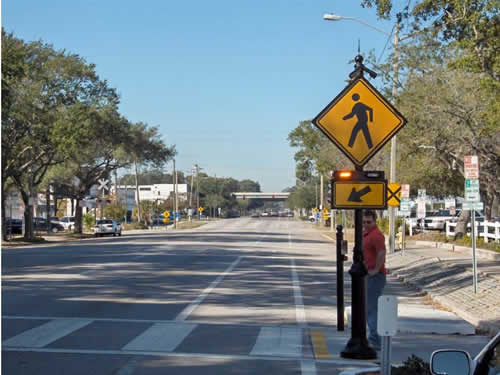